Meet the Band Members of All Tuned Up 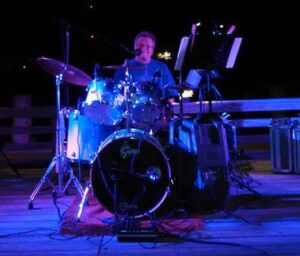 George started playing drums at age 5. His father was a self taught musician and would teach him to play all types of musical styles. George was involved with every possible music program while attending high school and was drum line section leader his junior and senior year. He was in the orchestra and was All South Jersey for drums 2 years in a row. He studied with Al Ipre during this time. After graduating he started to work in area clubs and restaurants and played in various bands. A few years later he started doing road work with show bands and traveled on the east coast. George started college a little later than usual and received an Associates Degree in Music from Burlington County College. He then attended Trenton State College and Rutgers University for a degree in music performance. During this time he was playing 5 and 6 nights a week in clubs and in Atlantic City Lounges. George studied with Tony DeNicolla and Joe Morella and became a well rounded player.  George has written many jingles and commercials that are still played on the radio in the South Jersey Area! 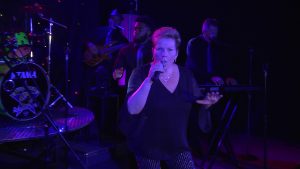 Diane started her singing career at a very young age appearing on The Al Albert’s Showcase, Sally Star and also Chief Halftown. She was destined to be on the stage from that point on! Diane studied voice, theory and guitar at Russell’s School of Music in Cherry Hill, NJ and won many group/combo competitions during her high school years. Diane performed at weddings and parties with her band Blue Mist during this period of time. After graduating she began working in local clubs and restaurants with a band called Night Flight. She studied voice with Paul Spencer Adkins, a world renowned tenor from the Philadelphia area. Diane went on to work with many of the area’s most popular bands including Grand Illusion, Double Take, Punchline and Shining Star Orchestra. She has recorded many radio commercials and jingles during her career and loves recording in the studio. She has performed at The Tropicana, Bally’s, Trump Plaza, Showboat, Caesar’s and Trump Marina, just to name a few! She continues to captivate audiences with her powerful voice and can sell a ballad like no other in this area. 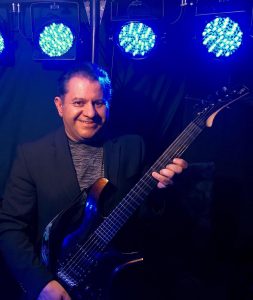 Jaime has played professionally in many venues in the Tri-state area, plus New York and Virginia. His musical talent covers a plethora of styles including jazz, rock, funk, and standards.  Jaime has performed in corporate/wedding bands as well as local venues with many talented musicians. His creative guitar and vocal styles adds and supports the creation of a beautiful musical concept that surely pleases listening and dancing audiences. 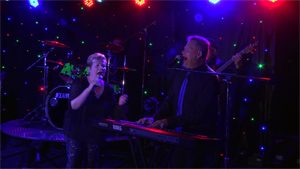 Lou Durham has been playing piano and composing music for nearly 50 years and is a native of South Jersey. He Graduated Rowan University, Glassboro, NJ Class of 1972. He holds degrees in commercial/jazz piano with a minor in composition, arranging and history, and a minor in Middle East politics and religion.
After college, from 1972 through 1986, Lou played music up and down the east coast performing at resorts and casinos. Lou was a member of the very successful bands Grand Illusion and Soundscape and was a band mate and good friend of George and Diane of All Tuned Up. He then auditioned and was accepted into the US Army as a pianist and toured with the band, traveling the world with the 214th Army Band, Atlanta, Georgia.

In 1994 Lou won an audition for the prestigious and elite US Army Band “Pershing’s Own” in Washington, DC where he made it a career move to perform as a pianist for President Bill Clinton, high ranking dignitaries, officers and members of congress, and actually spent six of those years as Vice President Al Gore’s personal pianist, performing wherever the Vice President requested his services. Some of these notable moments include being commissioned to either perform or write Grammy nominated music for many major shows including DC ́s 1812 Concert on the Mall, performances for Nixon, Carter, Reagan, George H W Bush, Bill Clinton, George W Bush, Barack Obama, Dick Cheney, Senator Ted Kennedy and Colin Powell, and at one point played for the King and Queen of Sweden. He has shared the stage with Clark Terry, Lew Solo, Dennis DiBlasio, Dave Koz, Darryl Worley, Trisha Yearwood, Mark Wills, Craig Morgan, The Soul Survivors, Harold Melvin And The Blue Notes, Teddy Pendergrass’ and many more. Recordings include 4 CD’s of patriotic music, including and featuring two title tracks he composed. He scored a composition featured in the award winning documentary, “Why We Fight”. Lou retired from the military after 23 years as a Master Sergeant. Lou has decided to reunite with is old band mates George and Diane! 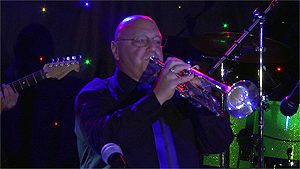 Tony started playing the trumpet in the 7th grade.
He joined The Bonsal Blues community band when he was 15 years old and was immediately a stand out musician. He has been playing professionally ever since. Tony has worked with many of the area’s top club bands and is now reuniting with George and Diane. He was a member of Punchline and The Shining Starz Orchestra in the past. Tony has also played in many big bands and concert bands in the tri state area. We are excited to reunite with one of the area’s top trumpet players.

Tune In For News

We will keep you informed where we are appearing! Click Here...

We Have Performed At: